To Colombians, July 20 is symbolic because that is the day their country became an independent republic. Some Austin area Colombians celebrated their country’s 200th year of independence from Spain, Bicentennial Day, this past weekend. 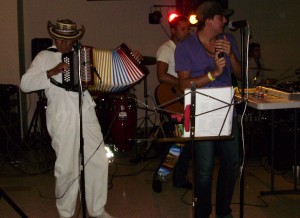 Jose Franco on accordion and Andres Junca on the mic

“It is very important to celebrate our country’s independence wherever we may live now,” said Emilia Hurtado, owner of Casa Colombia. This East Austin restaurant had a special menu for the weekend prior to Independence Day.  They served up traditional favorite foods like morcilla rellena (dark sausage), buñuelos (light fried Colombian pastries), pan de bonos (usually round food made of dough), sopa de mondongo (tripe soup), and higado encebollado (liver recipe with onion and garlic).

Jazmin Nunez, one of the partners at the Casa Colombia restaurant, said “We usually do the event here, but we are happy to celebrate anywhere, and there will be three bands and a DJ at the Round Rock celebration.”

Nury Belez, who is originally from Calle, Colombia, and son Jon Ravera own the Asi es Colombia restaurant and really enjoy celebrating the diverse culture of their country’s Independence Day. “We celebrate because it is part of our heritage and we feel strongly about it,” said Ravera.

The restaurant featured the Vallenatos de Mitierra band on Sunday and offered traditional Colombian dishes like their bandeja paisa, which comes with carne asada, ground beef, pork rinds, two eggs, sausage, white rice, sweet plantains, avocado, and arepa (a bread made of corn), along with chocoflan and arroz con leche for desserts.

Philonise Floyd told House lawmakers Wednesday that it's their … END_OF_DOCUMENT_TOKEN_TO_BE_REPLACED

The U.S. Consumer Price Index, the gauge that measures change in the costs … END_OF_DOCUMENT_TOKEN_TO_BE_REPLACED