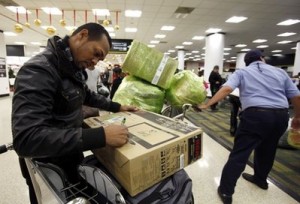 Thousands of Cuban-Americans are heading to Havana this holiday season carrying everything from electronics and medicine to clothing and toiletries to help relatives back home supplement monthly salaries averaging about $20.

Not only are Cuban-Americans visiting the island in far greater numbers since President Barack Obama lifted travel restrictions last year, they are bringing more stuff. One carrier says the average bag weight per passenger is up 55 percent — and many Miami-Havana flights are shadowed by a separate cargo plane just to haul the load.

“They bring you things for the family,” said Paulo Roman Garcia, a 45-year-old Havana native who makes $9.50 a month selling fruit at a market in the city’s historic quarter.

Roman Garcia was looking forward to a visit in the New Year from his older brother, who lives in New Jersey and will be coming down with stocking-stuffers such as clothing and treats, as well as big-ticket items including a stereo.

“My son has asthma, and he’s bringing inhalers for his asthma,” Roman Garcia said. “Medicines are very important. Some don’t exist here, or they’re hard to find.”

During the administration of former President George W. Bush, Cuban-Americans were allowed to visit only once every three years and were limited to $100 a month in remittances. Those restrictions ended in April 2009, although most non-Cuban Americans are still barred from traveling to the island.

Cuba watchers and charter flight operators say travel between the United States and Cuba skyrocketed after the change and continues to climb steadily.

“About 1,000 visitors are arriving a day from the U.S., and they expect somewhere close to 400,000 by the end of the year,” said Kirby Jones, president of Alamar Associates of Bethesda, Maryland, a consulting firm that works with American companies looking to do business with Cuba.

“The U.S. is now sending the second-most visitors to Cuba than any other country,” after Canada, Jones said.

The great majority are of Cuban heritage, and the rest are non-Cuban Americans traveling for officially sanctioned activities such as academic, cultural and sports exchanges. The figure does not include the small but growing number of Americans who sidestep the travel ban by flying in through Canada, Mexico or other countries, risking a stiff U.S. fine if they are caught.

Traffic is even greater during the busy holiday season, when charters add additional flights that quickly fill up. Miami airport officials said 55 flights are scheduled to depart to four Cuban cities this weekend, among the heaviest travel days leading up to Christmas.

At Havana’s Jose Marti International Airport, Cubans crowded up against a low metal fence last week, straining to watch for loved ones as they emerged from customs pushing carts piled high with shrink-wrapped luggage, kitchen appliances, televisions, stuffed animals and cardboard boxes bursting at the seams.

Arturo de Cordoba traveled from Miami with five suitcases crammed with cookies, sweets, rice and other goodies for his son and daughter, who picked him up at the airport.

“I come here to share with my children,” said Cordoba, a jeweler who has been living in the United States for 30 years.

Tom Cooper, the president and owner of Miami-based Gulfstream Air Charter, which flies a 146-seat 737 jetliner to Havana daily, said his company’s passenger load has doubled from about 23,000 in 2009 to approaching 50,000 this year.

Also on the rise are baggage numbers.

“We track every pound that goes on the airplane. Our average bag weight in the last year has gone from 85 to 132 pounds (from 40 to 60 kilograms) per person,” Cooper said. The first 44 pounds (20 kilos) are free, and there is a $1-a-pound surcharge after that, he said.

The load is so great that for about half of Gulfstream’s flights, the company charters a twin-turboprop cargo plane to carry the excess baggage, Cooper said.

The visits are something of a lifeline in Cuba, where, five decades after the Cuban Revolution, many basic goods that Americans take for granted are in short supply — from office supplies to clothing, makeup, aspirin, batteries and even cat food.

The Cuban government blames the 48-year U.S. embargo, which prohibits nearly all commercial trade with the island, with the exception of food and medicine. A historically stagnant Cuban economy hasn’t helped.

What goods can be had are often out of reach for average Cubans. A small 19-inch (48- centimeter) flat-screen TV can cost well over $2,000 in the few stores that supply them. That’s far more than the cost of bringing one in from the United States, even with the $270 import duty levied on electronics and the extra overweight charges.

Ten-year-old Daniela Lezcano of West Palm Beach, Florida, flew in alone for a three-week visit with her aunt, uncle, grandfather and other relatives in Pinar del Rio carrying clothing, food, medicine and toys, including a red model of a 1960 Corvette. Her family planned a Christmas feast of roasted pork, homemade sweetened cassava and a typical rice and bean dish known as “congri.”

“We are very, very, very happy to see other family members more often” since the travel restrictions were changed, said her uncle, Juan Miguel Guerra Pereira.

Indeed, many say that as important as the gifts are, the emotional reunions are far more significant for families separated by just 90 miles (145 kilometers) of sea between Cuba and Florida, but torn by decades of Cold War tensions.

Take Roman Garcia, who said he and 10 other relatives plan to be on hand at the airport to greet his brother when he returns for the first time since leaving Cuba in 1980.

“We will have to cry a lot. It’s a very beautiful moment, but very sad,” Roman Garcia said. “We will go home together. … He is going to be very happy, because it’s the house where he was born.”

Philonise Floyd told House lawmakers Wednesday that it's their … END_OF_DOCUMENT_TOKEN_TO_BE_REPLACED

The U.S. Consumer Price Index, the gauge that measures change in the costs … END_OF_DOCUMENT_TOKEN_TO_BE_REPLACED