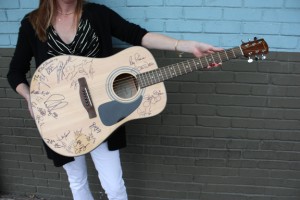 The 13th Annual Umlauf Garden Party benefiting the museum’s education programs on April 28th, 2011, from 6:30-9:30 p.m. will celebrate the work of 20th-century American sculptor and Austin resident Charles Umlauf (1911-1994) while guests mingle in the grounds of the beautiful Umlauf Sculpture Garden, sip wine, and are treated to culinary creations prepared by twenty two of Austin’s finest restaurants.

Attendees will celebrate the 20th anniversary of the museum’s founding and the centennial year of Charles Umlauf’s birth as the Nash Hernandez Orchestra provides big band music. In an effort to minimize the natural resources used at the event, Umlauf has partnered with Wandering River Recycling to implement a the use of compostable plates, forks and napkins, recycling, composting, reusable signage and the use of Forest Stewardship Council certified paper.

This year the Garden Party celebrates the work of local featured artist Roi James from studio in Westlake Hills where he creates landscape, figurative, abstract and conceptual works. Guests will bid on both the silent auction and the Celebrity Seeds auction. The silent auction features original art and luxury items including a “Texas Legends” autographed Fender guitar and a Herman Miller Nelson Bench. A raffle will be held for two 3-day passes to ACL Music Festival and a piece of jewelry from David Yurman. The Celebrity Seeds Auction features decorated pots donated by Austinites Mack Brown, Magda Sayeg (Knitta Please), Bill Worrell and 2010 Garden Party Featured Artist Greg Davis, among others.

Proceeds from the Garden Party support the Umlauf’s educational programming including free admission to all independent school districts and arts-in-education programming for the community through workshops, lectures and collaborations with other arts organizations. The program also supports internships for students with special needs, including individuals from the Texas School for the Blind and Visually Impaired and other students with learning differences; special needs tours for Helping Hands, the Texas Youth Commission, Club Latinitas, and other at-risk youth service organizations.

With help from proceeds from the Garden Party and in partnership between Austin’s private and public sectors, the non-profit Friends of the Umlauf Sculpture Garden funds, manages, and maintains the Museum and all its programs.  The City’s Parks and Recreation Department maintains the xeriscape garden.  Tickets to the Umlauf Garden Party can be purchased in advance on line http://umlaufsculpture.org/garden-party/ or at select Twin Liquors locations: Balcones Drive, West 7th Street (near Exposition and Lake Austin Blvd.), and Hancock Center for $100 and $115 at the door.
By Monica Pena
Austin Times

Philonise Floyd told House lawmakers Wednesday that it's their … END_OF_DOCUMENT_TOKEN_TO_BE_REPLACED

The U.S. Consumer Price Index, the gauge that measures change in the costs … END_OF_DOCUMENT_TOKEN_TO_BE_REPLACED